Sampling to the Masses with Street Teams 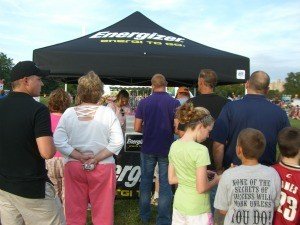 When tasked by Energizer Energi to Go with distributing over 70,000 Energi to Go Chargers at various events around the country in eight weeks, I thought, no problem, that’s what we do. It won’t be the easiest but we’ll make it happen (ahh, the Pro Motion Core Value that always seems to raise its head around this place!) Next task…Pro Motion was to stuff 34,000 Energi to Go Chargers with 68,000 Energizer Lithium batteries before the Komen 3-Day event and Lollapalooza in Chicago – our first events that were to run simultaneously the second weekend in August.

As my stomach started to knot, I went through the scenarios that could play out -outsource, lots of caffeine and no sleep for the next seven days, etc. I settled on sending out a company-wide e-mail to the PMI team. The result was overwhelming. Not only were the Energi to Go chargers stuffed, boxed and out the door on time but we were ahead of schedule and succeeded in stuffing the entire shipment of E2G chargers in seven days! In seven days! All 41,500 chargers were stuffed outside of normal business hours. Word to the wise – don’t listen when people tell you cash is not a good motivator. Another Core Value during these seven days was noticeable as every employee chipped in to get it done – Work as a Team, Win as a Team.
The duel events in Chicago were a huge success for PMI and Energizer Energi to Go. Our goal of 34,000 Chargers were distributed ahead of schedule by targeting the concert go-ers, many of whom forgot their phone chargers for the weekend and needed to text, twitter, e-mail and facebook about the great things that were happening inside and outside of Grant Park. Words such as “life- saver” and “amazing” were heard all weekend by the 11 staff members distributing chargers at the event. The concert attendees were telling friends and even strangers where they could find the gray and pink chargers that were allowing them communication with the outside world. One college-aged woman waited for 30 minutes outside the gates for a replenishment of tip connectors as this was a “dire emergency” that she be able to charge her phone.

Our next shipment of chargers and batteries arrives later this week but this time we have weeks before the next event takes place where we’ll distribute at the St. Louis Balloon Race and Austin City Limits. There will be no stomach knotting when the pallets start arriving as I wonder how all of the chargers will be stuffed on time. The core value of Work as a Team, Win as a Team will be sure to raise its head once again!