Does Your Brand Have a Secret Identity?

Hey gang! Remember when we talked about how comic books are linked to brand vitality, and the way that Stan Lee approached his audience through the sheer force of storytelling and the presumption of belief? But how does this relate your brand? Well, it turns out that the answer to that is to be found in comics books as well.

Your brand may have a secret identity and you don’t even know it. Many brands put on a mask and pretend to be something that they aren’t. This may seem normal for superheroes, but let’s look at how it may not be the best idea.

Not all superheroes have a secret identity. In a lot of cases, what you see is what you get. A great example of this are the Fantastic Four, who harbor no secret identities and have no secret headquarters. Everyone knows their names and where they can be found when trouble arrives. They have a credibility and accoun 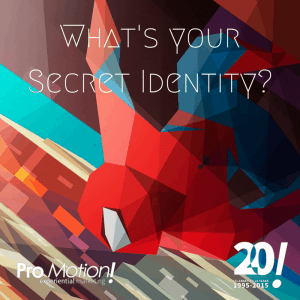 tability for their actions, and this open and refreshing relationship with the public is reflected in their popularity with the citizens of their four-color world.

In marketing, this is the “Fantastic” kind of relationship we seek to build between you and your target audience. Experiential marketing takes a brand that may be a dark avenger of the night and brings it into the light—putting your brand in front of people in a tangible way, taking off the mask of obscurity or misunderstanding when it comes to your products and services.

Taking off the mask

Let’s look at two divergent examples in the comic book world: Spider-Man and Superman. In a lot of ways they are similar: glue and red uniforms, protecting the common man, day jobs with local media outlets… But while Superman is seen as a symbol of truth and justice, Spider-Man is often hated, feared, and hounded by the authorities.

What is the difference? Well, there are lots of differences. But for the purposes of this blog (not a nerd blog, Steve keeps reiterating), we’ll say that the difference is that Superman doesn’t wear a mask. Although he does have a secret identity, nobody would know it just to look at him. In a very real way, Superman is the actual identity, and Clark Kent is the mask he puts on when he just wants a little bit of privacy.

Marketers who mask their products are like Peter Parker, masking himself and toiling in obscurity for the peanuts that J. Jonah Jameson pays him for pictures to trash his own reputation. He would be far better served leveling with and working with the public trust the way that Superman does.

If you want a solid ROI for your marketing buck, it’s worth your while to take the off your brand’s mask…and let the public know that you are there to save the day.